Using DesignCrowd To Get A New JustRetweet Redesign

More than a month ago, I sent an email announcing that we were launching a design contest to get a new redesign for JustRetweet using DesignCrowd.

We got a bunch of designs, which we whittled down to our two favorites, and in the end you guys helped pick a fresh new look which I think is going to work great for the site. 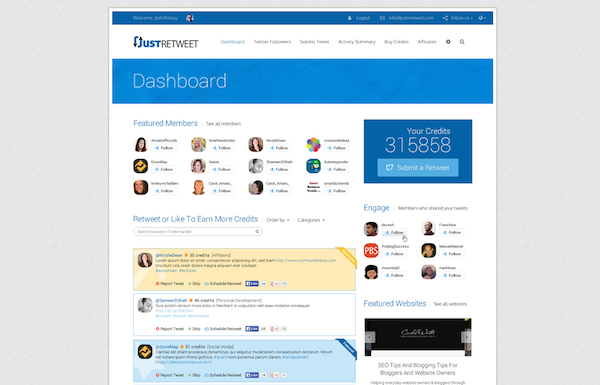 The handover process is now complete, and over the next couple months I’m going to start working on coding the site to use this new redesign. It’s going to take some hard work, but it’s going to be fun project for myself to code.

As site owners yourselves, I know many of you have your own specific design needs, whether it be for a new logo, banner, or full website design and using a crowdsourcing design platform might be a great option for you. So I thought it would be useful to share my experiences with using DesignCrowd to get design work done.

I’ve actually used crowdsourcing platforms quite a bit in the past. I’ve used 99designs before to get my current avatar done and also the logo for the last app which I coded, Bloggerscope.

Design is so crucial to everything we do online. It can make that instant impression that will grab hold of a visitor and get them reading your content or purchasing your product.

Design marketplaces like DesignCrowd and 99designs are a great way for someone like myself who has difficulty conceptualizing designs in my head. It’s one of those things where if I see what I want I can tell that if I like it. But trying to articulate exactly what I want before I see it can be a challenging task for me.

So when the folks at DesignCrowd reached out to me offering me the opportunity to use their platform to get a new redesign for JustRetweet, I jumped at their offer.

The first thing you need to do when you go to the site is decide what type of design you want created for yourself. DesignCrowd lets you launch contests in a wide variety of different categories from logos and web design to business cards and t-shirt designs.

The category you pick influences the minimum amount of money you pay for the contest. A logo design contest for example would start out at $240 and a T-shirt design contest starts out at $180.

For JustRetweet, I went with the Web page design category so the next step was to submit a design brief.

This is probably the most important part if you want to have a good experience. It affects which designers will take the time to join your contest. The better quality designers you attract, the better chance you have of getting multiple designs that you like.

What I did was include all the relevant requirements I had for the new design – 2 pages and a modern look and feel. I also included screenshots of the existing two pages I wanted to get redesigned as a reference.

Take a look at the design brief I used for my contest.

Once that is done, you need determine how much money to offer for your design contest. DesignCrowd actually offered me $400 in credit so I used the pay what you want option to create a custom package.

After that, you can select from a variety of extra project upgrades for extra money (I chose none) and pay for your contest. The contest will go live after approval in a few hours.

The default contest length on DesignCrowd is 10 days. (which you can change if you want) I received my first design about 48 hours into my contest going live. It wasn’t the greatest concept in the world, but there were some elements I liked about it so I left the designer feedback about what elements to get rid of and some other things to change.

One of the things I’ve learned from running several design contests is that being pro-active at examining each design is extremely important. If there’s a design that has potential, then make sure to leave feedback and rate each design.

If you leave all the feedback towards the end, then you won’t get a chance to get as many revisions as if you had started from the beginning.

On the other hand, if there’s a design (or designer) that you hate, then don’t be afraid to eliminate them right away. Once you start getting lots of designs, the bad ones will just start to clutter your page and distract you from the ones you want to focus on.

My contest actually started kind of slowly. After a week i had only gotten designs from about 4 designers.

This kind of worried me, so I contacted the DesignCrowd team about it. They went over my design brief and reassured me it’s quite common that designs start coming in during the last couple of days in the contest.

Fortunately they were right, and in the end I received 48 total designs from 13 different designers.

Quality-wise, there was a mix between not so great and some really nice designs. I actually ended up really liking two designs for JustRetweet. To help me pick the final choice, I sent out an email blast to the JustRetweet list to pick the winner which happened to be the design by June from Da Miracle.

After I picked June as the winner, the process moved to the design handover page. This let me work 1-1 with her to request any additional revisions I wanted for my design.

Since I had already gotten several revisions from June during the contest period itself, I only had a couple of minor requests which June was happy to do for me.

I then approved the design and the payment was released.

June gave me the source PSD files she created for the two pages as well as the fonts she used which I can now download from the site at any time.

Overall, I had a very positive experience with DesignCrowd. It was very easy to get up with and most importantly, I ended up with a new JustRetweet design that I think everyone is going to like.

I’m very excited about it, and I can’t wait to code it up and have it go live on the site.

The Affiliate Triad Review: 12 Ways It Will Help You Crush It As An Affiliate

ClickMagick Review: Is it the Best Link Tracker on the Market?